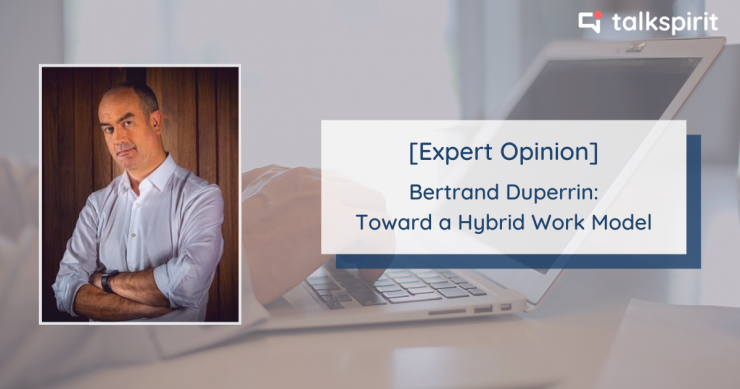 Today, many companies are adopting—or are being forced to adopt—a hybrid  work model that combines face-to-face and remote work. This is a redefinition of the workspace that requires companies to adapt management, communication and collaboration practices.

In order to better understand this change in work methods, we interviewed Bertrand Duperrin, Head of People and Delivery at Emakina France and author of the blog Le bloc-notes de Bertrand Duperrin.

Let’s take a glance back at this interview, in which he sheds light on several key :

On the business side, an evolution endured

In the vast majority of cases, this year companies have experienced more teleworking than they have ever chosen to do so. For some, the transformation went well, but it hasn’t been a complete success for everyone. Only under the pressure of the virus and employees have companies implemented this work model—they simply had no choice.

Even today, many HR departments and managers still hit the brakes as soon as they hear about teleworking, and they often admit so with regret. In France, teleworking is viewed as a perk like a company car and smartphone: in many companies, it’s still seen as a granted privilege—not at all as a work organization model. We give it to managers, not to every ordinary employee.

There’s still a widespread view that if you don’t see employees, they’re not working. This problem of trust reflects how deeply presenteeism is engrained in our culture.

On the other hand, employees are more inclined to embrace teleworking. A majority of employees who tested it liked it. However, we shouldn’t normalize everything either: some want to come back to the office five days a week, but others don’t want to come back at all. Companies need to open their eyes. Whether they like it or not: hybrid work is already upon us, and there’s no going back.

Impacts of the hybridization of work

Many companies are still asking questions about the consequences of the hybridization of work. But one thing is certain: hybrid work will transform the workspace, the culture and the way companies are organized.

An office turning into a socializing space

The nature of the office will change. In a context of hybrid work, it’s no longer just a workspace, but also (and above all) a space for meeting and socializing. Personally, I no longer feel like going back to the office to work; I work much better from home. That said, I would indeed like to return to the office to see people, have meetings, hold workshops, or even chat with the team over coffee.

Employees will give priority to chosen social moments over those they are undergoing. They will meet less frequently to work, but rather and above all to discuss and exchange ideas.

The rise of a results-based culture

At a distance, we are often afraid that people will hide and not work. But isn’t it easier to hide at the office? Indeed, from a distance, you can only function in a culture of results, i.e. according to what is achieved and delivered. From that point on, it is harder to cheat or create illusions.

From a distance, the only thing you see is what you’ve produced. In a company that is results-oriented, because of the distance, you can no longer hide.

Towards a systematic formalization of processes

With the loss of informal interactions, anything that is not organized will not happen. Until now, values and knowledge were transmitted through contact and observation. Now that’s over. Because from a distance, all processes that are a bit fuzzy and informal are shattered.

A remote company will therefore necessarily be a hyper-formalized company. During the lockdown, at Emakina, a reinforced monitoring and mentoring system was put in place so that when a new employee is hired, he can quickly find his place in the company.

Processes will be critical to the employee experience. This is why it will be necessary to hunt down inefficient processes and identify those that are missing. Because on a daily basis, a process that doesn’t work is a plague on employees.

The new (role of) managers

Many managers were traumatized during lockdown, because they saw that their employees were working very well at a distance. Some even realized that they were no longer useful … or that their role had to change.

Once everyone became remote, what becomes of managers who once spent their time asking for reports and checking what teams were doing? Managers realized things work to a great extent without their involvement. Their roles can seem no longer justified.

One thing’s for sure: for some time now, service-sector workers have no longer needed a foreman. In the beginning, there were some people who recruited less well-educated workers. Not being able to trust them, they constantly monitored what they were doing.

But today, management must learn to trust and delegate. Because in a teleworking context, a bad manager loses his teams after two months (demotivation, isolation, loss of productivity…).

In the coming months/years, there will be a shift in managerial roles; proximity managers will play an increasingly important role. It will be up to them to bring their teams to life and show them the interest of their missions. More and more, they’ve already become the one to call on when you need help or just need to talk to someone. But they’re also there to ensure teambuilding and create social ties—both face-to-face and remotely.

A collaborative experience that is now omnichannel

Just as it was discovered in the 2000s that the consumer was “omnichannel,” in recent years we have come to realize that the employee is also omnichannel. Typically, in all consulting firms, consultants have to be able to work from just about anywhere: on a train, in an airport, in a hotel room…

We all have to be able to do our jobs no matter what tool we have at hand, no matter what time zone we find ourselves in. From now on, everything must be in the cloud. And this has become a key criterion when choosing a new solution. Does it only work on a computer? Is there a mobile application? Is it SaaS or on-demand? Everything has to work on any device or operating system.

Finally, the employee experience must also be personalized. Think of it as an employer brand issue, since employees—just like consumers—are a market of one. We must therefore move towards a logic of experience personalization. It’s up to the company to offer career paths that are in line with the uses and expectations of their employees, so they remain motivated, involved and productive. Today, I find that the career paths we have in the company are still far too rigid and standardized.

Companies need to quickly realize that the employee experience is crucial for their survival, both to attract new talent and retain their best partners. The future belongs to employers who understand this.

Also read: If the Future of Work Had a Name: The Digital Workplace

Today, the trend is clear, we’re moving towards more and more hybridization of work modes. It’s an evolution that’s forcing companies to adapt by further formalizing processes and offering a “phygital” collaborative experience thanks to the adoption of collaborative tools designed for teams.

Want to learn more about the impact of digital transformation on the evolution of work methods? Read our white paper: Digitalization: French SMEs at a Crossroads.

How to Successfully Onboard New Recruits Remotely?

Working Differently: A Challenge the CEA Defied in a Matter of Months—with Talkspirit