Deploying an enterprise social network: Achieving the key step in the adoption of your ESN 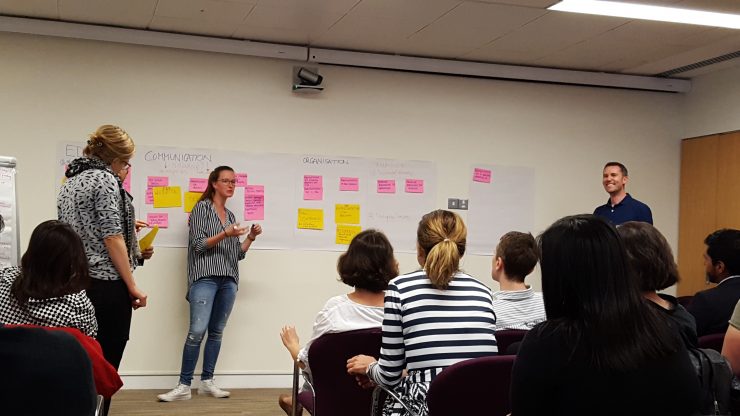 Deploying an enterprise social network (ESN) is always a huge challenge: convincing the target audience of its value in a short period of time. Beforehand, obtaining the support of key executives is essential to legitimize the project. And in the ideal scenario, they should not only promote its arrival. They must themselves exploit it and use it for their own collaborative needs.

The example set by top management, when it starts by changing its own practices, stimulates a dynamic of change. It encourages people to give up old work habits, especially the abusive use of email. This is what the Neovia Group’s digital team has invested in to support the deployment of Talkspirit. The virtues of exemplary behavior can be seen at all levels of the hierarchy, even up to the proximity manager or project manager. Exemplarity must be combined with tenacity, because changing work habits does not happen overnight. In a team, it usually takes several weeks or even months for each member to give up his or her old habits. Only then does the online community finally become the place where all the exchanges take place.

Read also: Defining the main use cases for your collaborative platform

Involve users in the pilot phase

In parallel with the involvement of top management, therefore from the pilot phase, it is essential to associate users, representative of the different profiles of the company. They are often referred to as ambassadors. It is increasingly common for them to be involved in large numbers, from 10 to 20% of the workforce over a relatively long period (between three and six months). This allows them time to adopt the tool in their own work context and to share their feedback with the project team. An immeasurable value!

Sometimes users are involved earlier in the project. At Fiafec, an authorized joint collection body, 17 of the 210 employees participated in the choice of software. The real estate company Nexity followed the same logic, inviting 70 of its 7,000 employees to test four tools in parallel on a specific business scenario. This approach had the merit of simplifying and objectifying the debates on the ESN choice. Time saved for implementation!

“The large-scale deployment of an enterprise social network is a project in itself and, as such, requires budget, resources and time”, explains Julien Cibat, Digital Project Manager at Neovia Group. Neovia Group is a company with 8,300 employees, established in 28 countries and specializing in animal nutrition and health. Neovia Group adopted Talkspirit in July 2017.

The objective of the enterprise social network is to unite international teams around an enterprise project and give them the means to collaborate with ease. The Digital and Communication departments, supported by IT, have orchestrated a gradual deployment by geographical area, starting with the teams based at the company’s head office. “It is essential to get top management on board early on and convince them to adopt the platform for their own collaboration needs. Then, we identify the first project ambassadors and we can envision a broader deployment,” adds the Digital Project Manager. While the project was still in its pilot phase, there were already more than 1,000 of them on the platform.

“To make the pilot phase sustainable and involve a large number of users gives time to identify ambassadors. It is also an opportunity to develop arguments according to the audiences and usage scenarios and to adjust the support system”, Julien Cibat argues. Each deployment on a site or in a subsidiary is a mini-project. This mini-project involves meetings with local directors, business line managers and HR to structure the approach, explain it and identify the right people to talk to. Among the key success factors, the Digital Project Manager highlights the quality of the relationship with Talkspirit. Indeed, “the support and management of feedback allows us to integrate the needs of users as well as possible, taking into account the differences in maturity and existing technological ecosystems.”

At KLM, some employees found that the way in which malfunctions related to in-flight services were reported was not efficient enough. Yet when a video screen or a seat is faulty, when meal trays are not in conformity, or when there are not enough magazines, it is crucial to react. And fast.

These employees therefore created a group dedicated to reporting these problems on the internal social network. As a result, the resolution time for some problems has been cut in half. Productivity gains on the processing chain and improved customer service quality convinced the airline to extend this mode of operation to the various lines.

The old process is no longer used. It used to organize feedback to the back-office through an online form, and then the information was sent back down to managers and staff in charge of refuelling and maintenance. Now they are immediately notified of messages published by cabin crew. Furthermore, the addition of photos, videos, some of which include passenger testimonials, and feedback from community members enhance the impact of the messages.

Benefits and limitations of chatOps

The chatOps category (including Slack or Microsoft Teams) consists of group messaging that allows you to interact with third-party applications. Exchanges can even be automated thanks to conversational agents (chatbots), which will become increasingly accurate thanks to artificial intelligence.

Limitations: ChatOps’ strengths become their weakness when it comes to widening the audience to an entire department or service (because everyone is then flooded with notifications). Similarly, it is necessary to capitalize on exchanges (because it becomes very difficult to find an exchange – or a document – with its context and to trace the thread of the discussion).

🔔 In the end, as soon as the collaboration involves a larger number of people ( more than 20 people), it is relevant to opt for an internal social network rather than a chatOp. This is more efficient.

Read also: 3 reasons why using an enterprise social network is essential in 2020

36: the average number of cloud services used by an employee. 20 of these are for collaboration, for file sharing (McAfee 2016 study).

64% of employees use email to share and interact with their team (YouGov and Lecko study, February 2018).