Internal Social Networks: Why They Boost the Efficiency of Your Teams 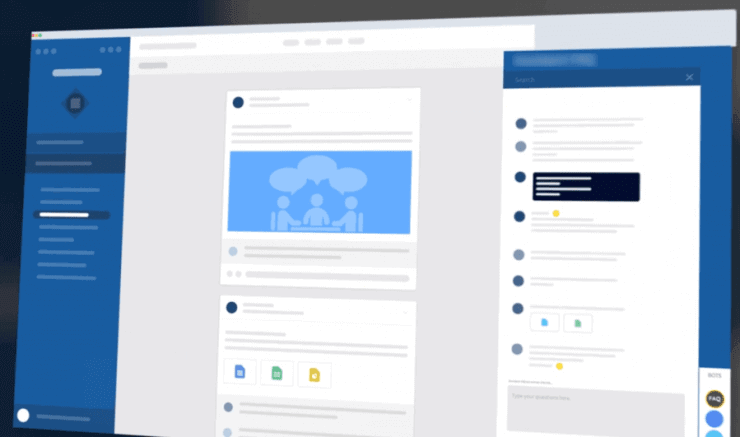 The emergence of social networks (Facebook, Twitter, Instagram, WhatsApp, Telegram, …) and their ubiquitous use has transformed the way we collaborate at work! Having the possibility to interact with colleagues and share information and documents within a team or project group—whether live or later—is no longer an option. It’s a necessity.

What’s more, your employees are demanding more: they want more “collaboration” to make their work more efficient and comfortable. They want to be able to meet in communities involving their fields and interests to stay even closer to the company entire’s ecosystem (even externally with customers, suppliers or partners) to find continuous opportunities for engagement. All this via high-performance digital solutions that make our lives easier.

The explosion of collaborative tools

In less than 10 years, collaborative tools have multiplied. Some were specifically made for a professional environment, whereas others, initially reserved only for personal use, incorporated into professional uses later on. Often, users (especially non-geeks) find it difficult to find their way around the range of tools available to them.

The limitations of email

Born in the mid-1960s at the Massachusett Institute of Technology (MIT), email was designed to send messages between computers, and was clearly a communication tool. Its use developed rapidly with the arrival of the Arpanet network (1969) and then exploded with the invention of the Internet in the early 1990s—both in the private and professional spheres.

While it’s clearly not optimal for collaboration, email nonetheless became a central tool in companies early on thanks to its simplicity; employees and their managers believing they were saving time. However, in collaborative work, i.e. when at least two people work together, its limits are glaringly obvious. In particular, the absence of true benefit in exchanges, the fragmentation of information (depending on whether one has been the recipient, the “carbon copy” or the “blind carbon copy”), the difficulty in organizing, finding, and consolidating information, the lack of efficiency, etc.

The following story illustrates the limitations of messaging in a collaborative environment. At T., a major automotive equipment manufacturer, the head of an IS team in charge of developing mobile applications decides to launch a survey to find a name for the latest functionality developed. He sends … an email to his six employees. In one week, around thirty emails are exchanged, including three “recap” emails. You read that right: 30 emails shared among six people! The example is symptomatic of the difficult challenge of breaking old habits. By taking advantage of the “survey” feature of their ESN, each person could have expressed an opinion once before the ultimate decision was taken. And in total transparency!

The key challenge: bring together all collaborative tools

Among the plethora of existing tools (see the list above), the enterprise social network stands out for its unique ability to cover both a wide range of uses and connect the organization to its entire ecosystem, as both internal and external stakeholders can be connected to it. In addition to its role as a hub, the network also offers increasingly sophisticated integration capabilities, such as connections to office automation tools and shared storage spaces. This connectivity has become the standard for the ESN to enable its users to collaborate on shared documents.

The great novelty of the last few years, popularized by ChatOps, is the ability to easily link to other bricks of the information system: these are the “integrations” of ESN with business applications. The internal social network then serves to dynamize and extend a business process, allowing faster, optimized decision-making. Thus, the social platform enables employees to handle simple processes in a more agile and responsive manner.

Recently, one of the big questions raised by the rise of chatOps and collaborative spaces built around group messaging has been the role the internal social networks should play. Schneider Electric has clarified the roles: chatOps host project groups as well as small teams (a few dozen people at most), while the corporate social platform hosts communities of practice and interest, bringing together a larger audience.

Does happiness at work have a real impact on employee productivity?